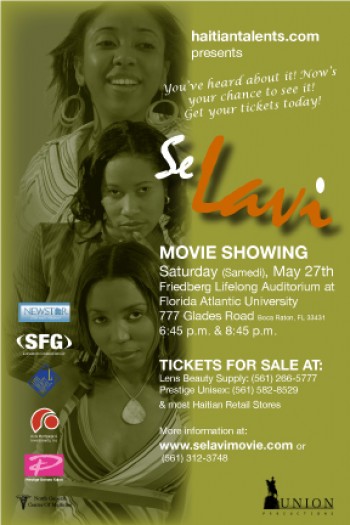 Upon the people's request, Se lavi adds another showing in Boca @FAU. Two showings 6:45 and 8:30 don't miss it! all the stars will be there. You will have a chance to get an autographed Se Lavi movie soundtrack and more...

Hey Selavi stars,
The last time I tried to go see the movie in Lake Worth, althouhg I purchased my tickets in advance, I couldn't make it, I heard it was wonderful! this time I am not going to miss it at FAU. By the way, one of my friends told me Nadine was awesome!and also everybody did great!but the only thing is, by the time my friend wanted to have Nadine sign his poster she was lost in the crowd.

They always forget about Fort Myers.

We have a lot of Haitian people in this State.

I will be glad to go somewhere to wath an Haitian movie in Fort Myers.

Haitian's movie play everywhere in USA.Why not in here to. Think about

this sounds like something my people do very well. speak french and act important, but never do anything.

I don't know if this person has seen the movie, but the acting in the "Se Lavi" that I have seen was just brilliant.

maybe you should go see it

Jean I just read the comment you made about Selavi but I do'nt believe you quite understood what you just wrote.

I know you very well and I do not recall that you saw the movie to the point that you have to judge actors by their attitude.